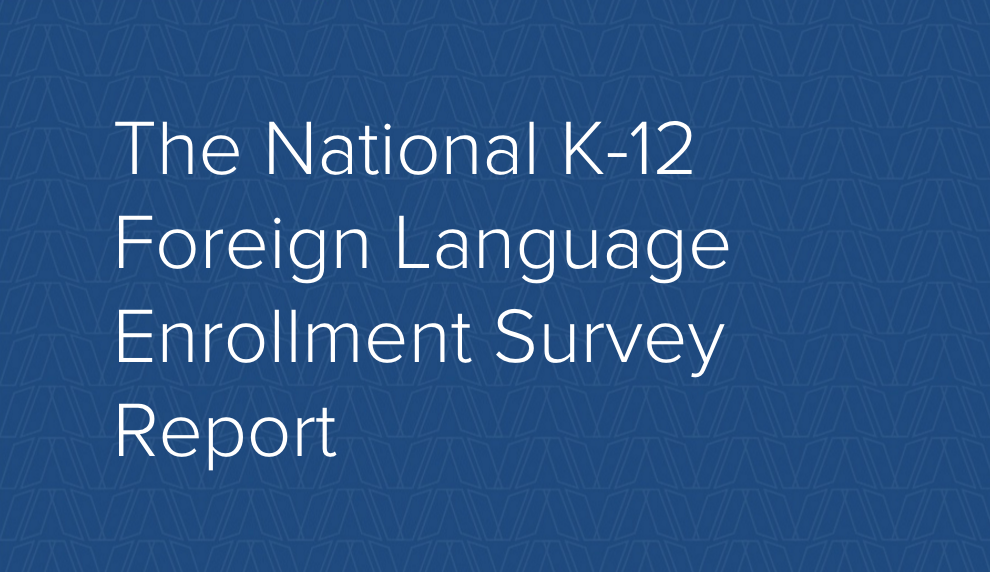 WASHINGTON — The National K-12 Foreign Language Enrollment Survey Report, unveiled today at the National Press Club in Washington, DC, provides policymakers and educators with an updated view of the state of language in the United States across the K-12 educational continuum.

The report documents world language enrollments across the formal US education system for a closer look at language education in primary and secondary schools. The Language Flagship at the Defense Language and National Security Education Office (DLNSEO) commissioned the analysis.

"Access to data on the distribution of enrollments among languages and grade levels is as critical for the nation's economic planning and national security as information on K-12 math and science enrollments," said Dan E. Davidson, PhD, president of American Councils, which implemented the new enrollment survey. "Such data yield important information about student demographics, availability of teachers, and levels of instruction by language offered around the country."

The report arrives on the heels of America's Languages, a report prepared by the American Academy of Arts and Sciences (AAAS) at the request of a bipartisan group of US senators and congressmen in 2017. America's Languages concludes that the United States remains monolingual to the detriment of its social, economic, and national security. AAAS offers a number of recommendations to help the US alter its course, taking note of the particular importance of collecting and maintaining data on the state of language learning across the US.

Throughout the United States, elementary and high schools are enrolling more students who speak a language at home other than English, and major world languages like Arabic and Chinese are being introduced into the K-12 curricula. At the same time, US employers are seeking employees who can navigate across cultures and speak more than one language. Both the DLNSEO and AAAS reports serve to inform policymakers, educators, and the general public on the current status and demand for increased foreign language education in the US.

About the Report
The National K-12 Foreign Language Enrollment Survey Report presents K-12 foreign language enrollment data in the United States, where more than 21 percent of households speak a language other than English at home.

The National K-12 Foreign Language Enrollment Survey Report is sponsored by The Language Flagship and National Security Education Offices (DLNSEO), conducted and published by American Councils for International Education in partnership with the American Council on the Teaching of Foreign Languages (ACTFL), the Center for Applied Linguistics (CAL), and the Modern Language Association (MLA), and in collaboration with the National Council of State Supervisors for Languages (NCSSFL).

The Institute of International Education (IIE) administered the DLNSEO grant in cooperation with Bryn Mawr College. The survey data and report do not necessarily reflect the position or policy of IIE or the government; and no official IIE or government endorsement should be inferred.