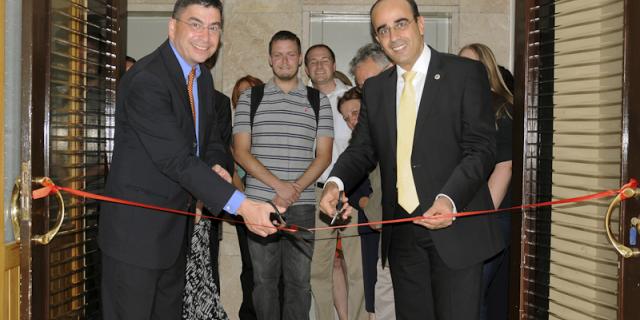 ANKARA, TURKEY— American Councils announced the opening of its new Turkish Overseas Flagship Center in Ankara, Turkey. The new Flagship Center is located within the Yenişehir branch of TÖMER , Ankara University's Turkish and Foreign Languages Research and Application Center. American Councils Managing Director for Overseas Language Flagship Programs, Victor Frank, PhD, was joined by M. Ertan Gokmen, PhD, in a ceremony to mark the opening of the Flagship venue. Dr. Gokmen is an associate professor of Korean at Ankara University and the new TÖMER director.

The Turkish Overseas Flagship Center offers resources and learning space for Flagship students to pursue advanced language proficiency in Turkish, a skill set that will differentiate them from their classmates as the world seeks a new generation of global professionals that possess overseas experience and multilingual capabilities.

"American Councils is committed to improving and investing in overseas training models based on the analysis of research and best practices in the field. The new Turkish Overseas Center will provide participants with access to resources so that they may achieve an advanced language proficiency in Turkish that is increasingly valued in a global society," said Dan E. Davidson, PhD, president of American Councils.

The Language Flagship Program is an innovative program overseen by the National Security Education Program (NSEP) that is designed to transform US undergraduates into highly proficient foreign language speakers. Flagship enrolls hundreds of students from disciplines including business, health, engineering and the social sciences in programs designed to deliver rigorous language training combined with a meaningful overseas experience. Graduates from this program command Superior level proficiency in one of many languages critical to US competitiveness and security, such as Turkish, giving them a competitive edge amongst a new generation of global professionals.

The Flagship community is made up of 26 Flagship programs at 22 institutions of higher education, and 10 Overseas Flagship Centers. Flagship programs are led by nationally-recognized leaders and innovators in language education, each Center sharing the common goal of educating students in the languages and cultures of the world. The Flagship overseas program model integrates important components to maximize the language immersion experience, ensuring that students are engaging in a range of content-based language acquisition activities needed to strategically increase their language proficiency. Flagship also engages at the K-12 level to promote the development of critical language speakers ready to enroll in immediate and advanced foreign language courses upon entering college.

"It was an honor to represent American Councils as we opened our new Turkish Overseas Flagship Center. American Councils is continuously expanding its breadth of programs and resources, granting more students an opportunity to learn other languages and to experience other cultures. I am glad that I could play a role in such an important milestone for the organization," said Dr. Frank.

Six students from the University of Maryland are currently studying at the new facility. In June 2013, these students will depart from Ankara with Superior level listening, reading, and speaking proficiency.

American Councils and TÖMER are also partners in the administration of the Critical Language Scholarship (CLS) Program. CLS is a program of the US Department of State, administered by American Councils, that offers intensive summer language institutes in 13 critical foreign languages, including Turkish. Since 2010, over 180 students have studied Turkish on the CLS Program through a partnership with Ankara University TÖMER and American Councils.